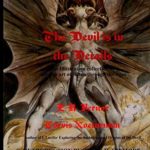 The Devil is in the Details:

An Illustration Collection of Fiendish Art of Satan Through the Ages
by E. R. Vernor / Corvis Nocturnum

The Devil hasn’t always been depicted as we know him today. From the Middle Ages through to the Renaissance and into modern times, Satan has had many different incarnations in art. Scholars say that no artistic representation of Satan was produced before the sixth century, and was only made official by the Ecumenical Council of 553. From then on, however, and throughout the Middle Ages, Satan’s imagery was everywhere: in manuscripts, in paintings, sculptures and architecture.

As Christianity grew and spread, so did belief in The Devil, who was blamed for illness, accidents, immoral behavior, crop failures and natural disasters. He was also said to be the leader of heretics, the enemies of the Church. This beautifully illustrated book by E.R. Vernor details the history of artwork of The Devil with over two hundred woodcuts, drawings, and paintings and postcards from the earliest days of printing to the 1900s.