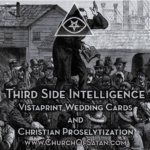 “We Satanists are against evangelizing and proselytizing (in any form) as we consider these to be intrusive, bullying acts that are antagonistic to free will. Having any religion foisted on unwilling people is not Satanic. Such deeds in a rational society should be deemed to be criminal. Laws that promote a majority religion’s beliefs which could hamper the civil rights of those outside that religion should be repealed where they exist. Fortunately we’ve seen a wave of sanity recently wherein more and more states are allowing equal civil rights under the law by establishing legal same-sex marriages—a position I’ve advocated for many years.”

The argument against proselytization has been one of the bedrock principles of Satanism since its inception in 1966.  We have no interest in converting folks to our way of thinking, unlike Christians, who will go so far as to ruin a beautiful event like a wedding, to get their message out to people who just don’t want to hear it.

“Satan entices your flesh with evil desires” and sin is the result of your failure to resist the temptation,“ the pamphlet read. "It is an act of rebellion against God’s holiness.”

The couple’s lawyer, Michael J. Willemin of the law firm Wigdor LLP., says in the suit, “The pamphlets – plainly sent to threaten and attack Mr. Heasley and Mr. Borg because they are gay – warn that ‘Satan entices your flesh with evil desires.’”

In fact, let’s take this a step beyond philosophy and religion for a moment, and just look at the logic of the situation: Stephen Heasley and Andrew Borg are two men in love, and they’re making a commitment to each other to spend the rest of their lives together.  Generally speaking, this is not a decision people make lightly. One can assume that a lot of time, thought, and emotion went into making this commitment to one another.

Now, with that in mind, what reasonably intelligent person would think that, upon seeing the hateful and bigoted material sent to these men, that one or both of them would magically think “Gee Steve, these Christian folk are right.  What are we doing, committing to a life of sin like this?!  Nevermind that you make me happier than I’ve ever been before! We need to call this whole thing off, and recommit ourselves to lives of misery, self-loathing, and forcing ourselves to have approved-of sex with unsuitable partners!  This seems like the right thing for us to do!  I sure am glad Vistaprint was there to stop us from condemning ourselves to a life of happiness and fulfillment!”

Does anyone reading this really see that happening?  No… me neither.

We find this kind of behavior rude and abhorrent, and we hope this couple finds justice in the true and legal sense.  Lex Talionis!