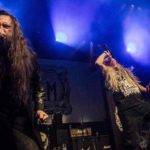 DOWN AMONG THE DEAD MEN, JUST BEFORE DAWN & More from Warlock David Ingram

Some news regarding my forthcoming endeavours:

1. The new album from my band DOWN AMONG THE DEAD MEN, titled “…And You Will Obey Me” is now up for pre-order at the link below. It’s available in standard CD format, limited edition box set, and digital. There are also T-shirts available, and a promotional video out now featuring the album’s title track: https://www.youtube.com/watch?v=Rg2zw8pCADk

Everything from the production and the composition right down to the cover artwork is just utterly perfect in every way, and I feel like doing my usual schtick with Dave’s albums (i.e. making a joke at the title’s expense) would just be wrong in this instance. There really is no topping this. We have new albums from bands like Memoriam and Onslaught due this year, as well as the long-awaited new Coroner album on the horizon, and honestly… I don’t think any of them could possibly hold a candle to this magnificent specimen.

2. I recently became the full-time vocalist for Swedish war metal band JUST BEFORE DAWN. A new album “Tides Of Blood” (of which I wrote and perform on 6 of the 10 songs) will soon be released, and we are embarking on some live shows around Europe starting next week.

3. And finally, on April 1st my online show over on Radio Free Satan celebrates it’s 10th Anniversary. Stay tuned for some surprises! Listen in at RadioFreeSatan.com!