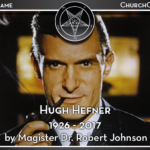 He said it best, “The major civilizing force in the world is not religion, it is sex.” And for 91 years no one lived that philosophy better than Playboy magazine founder, exemplary rake, epicurean and de facto Satanist Hugh Marston Hefner who passed away on September 27 at the iconic Playboy Mansion.
A free speech warrior and steadfast champion of personal liberty, Hefner built the company into one of the most recognizable American global brands in history encompassing publications, clubs, casinos, film studios, merchandise licensing and the Playboy Foundation that fights censorship and funds human sexuality research.

The groundbreaking Playboy Interviews tapped some of the greatest free thinkers of the 20th century including luminaries like Frank Sinatra who shocked the world in his 1963 interview with his views on the hypocrisy of organized religion and disbelief in a personal God to whom he never looked for comfort. “I’m not unmindful of man’s seeming need for faith; I’m for anything that gets you through the night, be it prayer, tranquilizers or a bottle of Jack Daniel’s.”

Hefner’s passing is surely sad, but his lust for life was my personal beacon for more than half a century.

Like some prophetic universal shift, magic was surely at work in the first year of my life when Hefner created Playboy in 1953. His zeitgeist somehow penetrated my psyche even as an infant influencing nearly everything I aspired to be for the next 60+ years. The inaugural editorial that year stated; “We enjoy mixing up cocktails and an hors d’oeuvre or two, putting a little mood music on the phonograph and inviting in a female acquaintance for a quiet discussion on Picasso, Nietzsche, jazz, sex.”

That quote and Hefner’s philosophy for living a carnal life (much akin to Satanism) resonated and pushed me to the goal of one day working for my idol. The “is-to-be” happened in 2003 when I was hired on as a Playboy executive. And later, the creation of Old Nick magazine that’s commonly referred to as “Playboy With Horns.”

Having the profound honor and pleasure of being in his presence I am fond of remembering how whenever a mixed group of men and women gathered Hefner’s focus was ALWAYS on the gals – men came second. Like Church of Satan founder High Priest, Anton Szandor LaVey, Hefner knew the real power women hold — nude or not!

He may not have carried a CoS red card but Hefner truly understood the power of a strong ego: “It’s good to be selfish. But not so self-centered that you never listen to other people.”

“If you let society and your peers define who you are, you’re the less for it.”

Hefner’s respect for all who embrace themselves as their own gods — especially where sexuality is concerned — was unmatched; “If it was wrong to persecute heterosexuals in a homosexual society, then the reverse was wrong too.”

One of my favorites was his mocking of the Christian beatitudes in the Playboy Philosophy and words for all Satanists to live by; “Blessed is the rebel, for without him there would be no progress.”