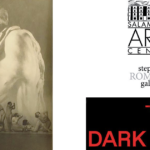 May 28, 2018. The photographic art of William Mortensen (1897-1965) will be featured at this year’s DARK MOFO festival in Tasmania as part of curator Brenden Walls’ INVISIBLE HOUSE exhibition at the Salamanca Arts Centre (13-24 June, 2018, Hobarth, Tasmania, Australia).

The exhibition is comprised of 30 works from the collection of the Stephen Romano Gallery, many of which are exhibited publicly for the first time ever, as they were recently acquired from the estate of William Mortensen’s first wife Courtney Crawford (and as such have been hidden from the public for almost 90 years). The exhibition also features new work by renowned Australian esoteric artist Barry William Hale, who has drawn authentic magic sigils onto four photo-gravure reproductions from the 1936 edition of William Mortensen’s own book Monsters and Madonnas.

Born in 1897, Mortensen began his photographic career taking portraits of Hollywood actors and actresses, as well as film stills from various movie sets, during the 1920s. After being blacklisted in Hollywood in 1931, he moved to the artist community of Laguna Beach, California, where he kept a private art studio and founded the William Mortensen School of Photography.

During a career which lasted four-plus decades, the artist preferred a pictorial style, whereby he could manipulate photographs to produce romantic, painterly-like effects. This style brought him direct criticism from the straight photographers of the modern realist movement, and in particular spawned a prolonged written debate with Ansel Adams, who referred to Mortensen as “The Anti Christ.”

In recent years a renewed interest in Mortensen’s work has arisen—particularly for his development of manipulation techniques and layering, each labor-intensive in the years prior to Photoshop and other contemporary design techniques. In 2014 the Stephen Romano Gallery mounted the first major exhibition of William Mortensen’s art in over 20 years, in association with the release of the William Mortensen retrospective book published by Feral House, both entitled William Mortensen: American Grotesque. The current exhibition at INVISIBLE HOUSE should only add to the mystique and profundity of this immensely influential artist.