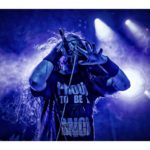 “In a candid interview over a few beers, Mark Eve chats in depth with bona-fide death metal legend Dave Ingram.  Known for his unmistakable vocal performances in bands such as Benediction, Bolt Thrower, Downlord, Echelon, Down Among The Dead Men and, most recently his time fronting the Dutch death metal storm-troopers Hail Of Bullets as well as having a mountain of other bands and projects on the go.”